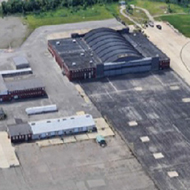 Stavatti Aerospace completed the purchase of the former U.S. Army Reserve Center located near Niagara Falls, NY. Stavatti formally took over the site adjacent to the Niagara Falls International Airport on October 31, 2020. The 19.8 acre site will serve as Stavatti’s prototype development, production and aircraft Low Rate Initial Production center. Stavatti anticipates the employment of nearly 600 aerospace engineering, development and manufacturing professionals at the site within the next 5 years.

The new facility will serve as an interim headquarters for Stavatti Aerospace and headquarters for Stavatti Niagara. The former USARC facility was acquired in accordance with Stavatti’s site selection process for a Prototype Development Center as specified in the Stavatti Site Selection Request for Information issued in March 2019 to sites throughout North America. Upon an extensive 15-month review of responses from over 30 US States and 3 Canadian Provinces, Stavatti down-selected the former USARC facility in June 2020 and began the acquisition process.

The USARC facility was declared surplus Federal property in 2011 by the Department of Defense under the Base Realignment and Closure (BRAC) process after which it was acquired by the Town of Niagara, NY and later the Niagara Falls Airport Center of Commerce LLC. The site consists of 10 buildings including a 47,000 sq ft aircraft hangar and over 76,800 sq ft of offices and direct airport ramp, taxiway and runway access.