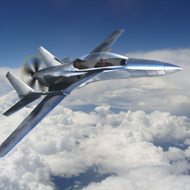 On June 10th Stavatti Aerospace introduced a new configuration for the SM-26 Sleek series of high performance sportplanes and military trainers. The announcement included the release of the new Sleek series concept, as well as SolidWorks CAD models, arrangement drawings, specifications and performance data and preliminary product linecards. Concept development work for the new Sleek series began in April 2016. Focused upon updating, renewing and revitalizing the design, the new Sleek is no longer a derivative of the SM-27 Machete, but is instead a unique aircraft designed from-the-ground-up that provides the same look and feel as the Machete. Although sharing a common appearance with the Machete, it is distinctly different, being physically smaller at approximately 2/3rds the size of the Machete.

Intended to serve as a 2/3rds scale Machete demonstrator as well as a high performance sportplane, the Sleek serves as a Scaled Machete for the civil market. Providing a true military fighter feel in a general aviation sized package, the Sleek will be produced in a variety of FAA FAR Part 23 variants including the SM-26, SM-26A, SM-26B, SM-26C and SM-26T. The SM-26 will serve as a single engine, two seat tandem general aviation sportplane. Powered by a 750 hp Trace Supercharged V-8 engine, the SM-26 will be a very fast, very capable, high performance general aviation aircraft. The only light plane on the market to provide an F-16 style cockpit with Recarro seats, the SM-26 is being sized to compete effectively with Lancair and Cirrus Performance Aircraft while offering distinctive comfort and style.

A next generation aircraft with a host of advanced features, the SM-26 will introduce a novel Fly-By-Wire (FBW) flight control system to general aviation. The SM-26 will have an empty weight of 2,550 lbs and a 3,700 lb MTOW resulting in a useful load of 1,150 lbs. SM-26 maximum level speed is projected at 330 KTAS at altitude. With a maximum range in excess of 1,100 nm, the SM- 26 will takeoff and land in less than 1,100 ft.

The SM-26T is Stavatti‘s Basic Trainer. The SM-26T military trainer benefits from a 750 hp, supercharged Trace V-8 engine driving an 8 ft diameter, 5-blade scimitar propeller. With an empty weight of 2,630 lbs and 3,700 lb MTOW, the SM-26T offers a 58 KTAS approach speed, a maximum level speed of 330 KTAS and a 5.5 hour endurance. A basic trainer, the SM-26T is designed to safely perform a litany of standard maneuvers including stalls and spins and will receive FAA FAR Part 23 certification. With a low operating cost, ejection seats, retractable landing gear and a fighter-feel, the SM-26Tis an affordable basic trainer.

The SM-26A is an advance Light Attack (LA) aircraft. Retaining the basic SM-26T airframe, the SM-26A is powered by the same 750 hp supercharged Trace V-8 engine. Featuring a standard Sleek trainer cockpit, the SM-26A is also equipped with tandem ejection seats with a stepped arrangement to permit the flight instructor to scan over the student’s seat. The SM-26A has a 3,170 lb empty weight, a 7,500 lb MTOW and the ability to carry up to 2,500 lbs of external stores on eight underwing hard-points for weapons training and light attack. With a 48 lb/sq ft wing loading, the SM-26A will offer a stall speed of 57 KTAS and a maximum speed of 326 KTAS. Maximum SM-26A rate-of-climb is 3,500 ft/min rising to a 39,000 ft service ceiling. Designed for a 7.5-g load factor at MTOW, the SM-26A will be FAR 23 certified and fully aerobatic.

Designed as a 21st century successor to the Pilatus PC-9, T-6A Texan II, AT-6B and EMB-314 Super Tucano, the SM-26T will compete directly with the PC-21. Suitable as a 21st century JPATs successor, the SM-26T exceeds the performance of the T-6A/T-6B while offering the COIN/Light Attack capability of the AT-6. Stavatti Aerospace has begun advanced design of the Sleek Series. Able to serve as a direct competitor to the T-6A and PC-21 at a lower flyaway cost than the SM-27, the Sleek will satisfy a nice market which evolved Machete configurations presently outclass.