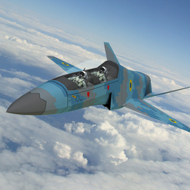 On 29 March 2019 Stavatti received a Letter of Intent (LOI) from a US Allied Air Force for their acquisition of up to 60 single engine 5th generation SM-31 Stiletto Supersonic Trainers and Advanced Light Fighters. The aircraft are intended to serve as a low observable replacement for existing advanced jet trainer aircraft. The LOI serves as the first significant customer end-user order for the SM-31 type aircraft since the beginning of aircraft engineering development.

The LOI specifies an interest in the acquisition of the SM-31 aircraft as well as Stavatti’s provision of maintenance and logistical support for the type and the establishment of a joint venture Stavatti Aerospace company within the customer nation to facilitate aircraft assembly and production in-country.

Stavatti anticipates the production of up to 20 initial SM-31 aircraft at a new Stavatti production center in the USA with 40 aircraft being produced in country at a joint venture Stavatti aircraft assembly plant.

Powered by a single Honeywell F125-GA-100, F125X or F125XX afterburning turbofan, the SM-31 is equipped with F-16 style flight grips, reclined Martin Baker Mk16E or MK18 ejection seats, a glass cockpit with Large Area Active Displays, a HUD or Canopy Embedded Display, HOTAS and integrated avionics. Benefiting from Electromechanical and Electrohydraulic actuators for primary control functions, the Stiletto will be an all-electric, Power-By-Wire (PBW) aircraft. Constructed from aluminum lithium and titanium and featuring aluminum lithium honeycomb sandwich skins, the Stiletto features a low observable, planform aligned configuration. With in-flight refueling capability, integrated avionics and 9-g plus maneuverability with standard air-to-air intercept stores, the Stiletto will be available in advanced trainer configurations without radar, as well as fully-equipped fighter variants with AESA radar and a comprehensive EW/Self Protection Suite. As a warfighter, the SM-31 is equipped with an internally mounted 20mm cannon and has both an internal weapons bay to carry two AIM-9X class AAMs as well as up to six external stores hardpoints to carry up to 7,000 lbs of external ordnance.

Delivery of the SM-31 is expected to begin in 2024 following its military qualification. Stavatti projects 50 to 100 aircraft will be produced annually by Stavatti at production facilities in the USA and in specific allied nations.