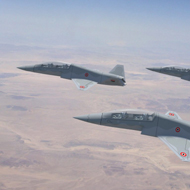 On 15 October 2020 Stavatti submitted a response to the Egyptian Ministry of Defense (MOD) Request For Quotation (RFQ) for 36 Advanced Jet Trainers for All Weather Conditions for the Egyptian Air Force (EAF). The Stavatti submission consisted of Technical and Financial proposals for two potential solutions including a non-development solution as well as a new design developmental aircraft. The Stavatti non-developmental solution consists of a single engine, two seat tandem Advanced All Weather Jet Trainer and Ground Attack Aircraft.

In addition to the non-developmental Stavatti solution, Stavatti also offered the SM-31T Stiletto as potential solutions to the Egyptian MOD requirement. The SM-31T is an advanced single engine, two seat tandem Supersonic Trainer and Light Weight Fighter aircraft. Powered by a single Honeywell F125X afterburning turbofan and featuring Power-By-Wire (PBW) flight controls, tandem MK18 ejection seats and aluminum lithium honeycomb sandwich construction, the SM-31T will feature an all-glass touch screen cockpit and will meet JPATS cases 1-8. A low observable stealth aircraft, the SM-31T features an internal weapons bay and 2D thrust vectoring. The SM-31T as proposed was offered at a flyaway cost in the $17 Million class with an estimated CPFH of $3,204 and 3.46 MMH/FH. The SM-31T is anticipated to be available for production deliveries in 2024-2026. The SM-31T as proposed will be produced in the USA. Stavatti has secured Letters of Intent (LOIs) for the delivery of over 60 SM-31 Stilettos by US Allied Air Forces and was awarded the Design Patent for the SM-31 by the USPTO on 23 July 2020.