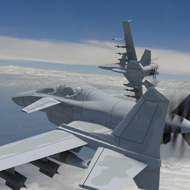 A single engine Close Air Support (CAS) and Attack Aircraft, the SM-27 is intended to address anticipated future CAS and attack aircraft needs of both the United States and NATO/Allied Air Forces. Powered by a 4,000 SHP turboprop, the SM-27 is a three surface aircraft featuring a moderate aspect ratio wing, canard foreplanes, twin vertical stabilizers and an all moving horizontal tail. With a maximum level speed of 400 Ktas, the SM-27 is armed with a 30mm cannon and can carry up to 8,000 lbs of ordnance over 2,000 nm. Featuring an F-16 style, all-glass cockpit that incorporates F-16 flight control grips and reclined Martin Baker Mk16 ejection seats, the SM-27 will be produced in single seat attack (SM-27S) and two seat tandem attack/lead-in Fighter (SM-27T) configurations. With in-flight refueling capability, integrated avionics and 9-g plus maneuverability in the clean-configuration, the turboprop Machete will be available in basic configurations without radar, as well as fully-equipped variants with AESA radar and a comprehensive Gen 4 or 5 EW/Self-Protection Suite.

The SM-27 is designed to serve as a successor to attack aircraft including the A-10 Warthog, Su-25 Frogfooot, A-1H Skyraider, Super Tucano ALX, AT-6 Wolverine, OV-10 Bronco, A-37 Dragonfly, IA-58 Pucara and other attack aircraft. Now under development by Stavatti as a privately funded, commercial program, the Stavatti response outlined how Stavatti has the capability necessary to meet the LAA requirement within the Air Force’s time frame without causing an unacceptable delay in meeting and exceeding the needs of the warfighter.

A privately funded, commercial program, Stavatti’s SM-27 Machete Business Plan calls for a $400 Million development program including a $40 Million Prototype Demonstration and Validation (Dem/Val) phase followed by a $360 Million Full Scale Development (FSD) effort that will result in FAA type certification, DoD Military Qualification and Low Rate Initial Production (LRIP). The SM-27 is now being developed in California and Stavatti is evaluating over 15 potential sites throughout the United States at which to establish the Machete family production line. Stavatti projects producing between 50 and 100 SM-27s annually depending upon global customer needs and aircraft demand.