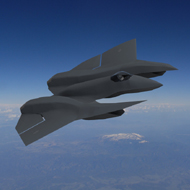 On December 17th, 2010 Stavatti Aerospace submitted a White Paper in response to the Next Generation Tactical Aircraft (Next Gen TACAIR) Capability Request For Information (CRFI) issued by the USAF-Aeronautical Systems Center, ASC/XRS, 2275 D Street, Wright-Patterson AFB, OH 45433-7224. The Stavatti response was a 21-page submission discussing concepts for a next generation Air Superiority Fighter. The Stavatti Air Superiority Fighter (ASF) is a 6th generation aircraft that will be introduced by 2025. Designed to address US and international allied market needs, the ASF is intended for export to nations that presently operate F/A-22 and F-15 aircraft. The ASF will directly satisfy any USAF requirement for a Next Gen TACAIR for operation within the 2020-2050 time-frame.

Envisioned as an F/A-22 successor, Stavatti has road-mapped an ASF program plan whereby development will start before 2020 with IOC beginning between 2025 and 2027.

The Stavatti ASF will be developed as either a program sponsored by the US DoD in support of a formal USAF or USN requirement, or as a privately funded, commercial initiative focused upon Direct Commercial Sales to domestic and allied customers. The ASF will be a twin-engine, manned or unmanned, low observability aircraft with super-cruise, super maneuverability and short-field capability. The ASF will be an airbreathing aircraft designed to operate within the stratosphere. The aircraft will be designed for all-weather supersonic flight at high and low altitudes. Primary mission capabilities include: Air Superiority, Air Intercept and Combat Air Patrol. Secondary mission capabilities include First-Day-Of-War Precision Strike, Suppression of Enemy Air Defenses, Reconnaissance and Close Air Support.

Emphasis is placed upon a high performance aircraft, with high acceleration, climb and turn rates with exceptional maneuverability to fulfill both close-combat, dogfight and Beyond Visual Range roles. The ASF is designed specifically to counter threats posed by current 4th and future 5th and 6th generation Chinese and Russian fighters including the Su-27, Su-30, Su-33, Su-35, PAK FA/T-50, MiG-35, J-10, J-11, J-20 and J-XX. A successor to F/A-22, F-15, MiG-31, Typhoon and Rafale aircraft, the ASF will compete internationally with other new 4th and 5th generation fighters now under development including the Mitsubishi ATD-X, Korean Aerospace KF-X and India’s AMCA.

ASF concept definition began in 2009 and will continue until the beginning of vehicle Advanced Design. All conceptual design has been performed using baseline requirements established by Stavatti to develop an aircraft that will exceed F/A-22 capabilities and provide a significant edge over potential threats during the 2020-2050 timeframe Stavatti has assigned ASF program concepts three different model numbers: The SM-39, the SM-49 and the SM-88. These model numbers represent distinct approaches to the ASF. The SM-39 is a fixed-wing ASF, where the SM-49 is a variable geometry swing-wing aircraft. The SM-88 is a variable geometry oblique-wing aircraft. Stavatti is producing a number of concepts for each of the three aircraft models from which a final configuration will be selected to represent the specific model type.