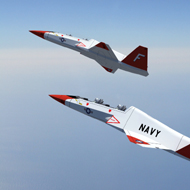 On 13 July 2020 Stavatti submitted a response to the US Navy Undergraduate Jet Training System (UJTS) Request For Information (RFI). The response to the solicitation (NAVAIR RFI Serial Number 20-001/UJTS) was submitted to Procurement Contracting Officer Blake A. Strickland. An e-mail confirming the on-time receipt of the Stavatti submission was provided by a NAVAIR representative. The Stavatti UJTS solution consisted of a non-developmental, single engine, two seat tandem Undergraduate Jet Trainer, Advanced Trainer and Ground Attack Aircraft.

The aircraft will feature Martin Baker MK18 or ACES 5 zero-zero ejection seats, a JPATS Category 1-8 compliant cockpit and a single Honeywell F124 turbofan powerplant. The aircraft will be equipped with a carrier suitable arresting hook and will be capable of being launched by catapult from a Nimitz/Gerald R. Ford class carrier deck. The Stavatti UTJS will feature advanced aluminum lithium and scandium aluminum alloys throughout, benefit from Friction Stir Welding (FSW) and has a proposed unit flyaway cost in the $15 Million class. Benefiting from advanced production techniques, enhanced reliability systems, systemic Built-In-Test (BIT) and an Open Avionics Architecture (OAA), the Stavatti UTJS has a projected Cost Per Flight Hour (CPFH) of $4,052 with 2.95 MMH/FH.

Addressing a potential need to replace up to 220 USN T-45A/C Goshawks on a one-for-one basis, the non-developmental Stavatti UJTS solution may enter production and begin deliveries as early as 2021. The Stavatti UJTS will be produced at a Stavatti aircraft manufacturing plant in the USA in full compliance with the Buy America Act being 100% “Made in the USA.”

In addition to the non-developmental Stavatti UJTS solution, Stavatti can also offer the SM-28N Machete and the SM-31N Stiletto as potential alternative solutions to the UJTS requirement. The SM-28N is a navalized, advanced jet trainer variant of the single engine, two seat tandem SM-28T Machete Close Air Support (CAS) aircraft. The SM-28N will feature carrier suitable arresting gear, electromechanically actuated folding wings and a single non-afterburning F414 derivative powerplant. Sharing powerplant component and systems commonality with the F/A-18E/F, the SM-28N will have a flyaway cost in the $20 Million class with an estimated CPFH of $4,000 and 6.56 MMH/FH when equipped with a 30mm GAU-8 cannon and comprehensive ECM systems. The SM-28N is anticipated to be available for production deliveries in 2024-2025 meeting the USN requirement to have a non-developmental UJTS solution before 2028.

The SM-31N is a navalized, advanced supersonic trainer variant of the single engine, two seat tandem SM-31T Stiletto Supersonic Trainer and Light Weight Fighter aircraft. The SM-31N will feature carrier suitable arresting gear and a single F125 derivative afterburning turbofan powerplant. The SM-31N will have a flyaway cost in the $17 Million class with an estimated CPFH of $3,204 and 3.46 MMH/FH. The SM-31N is anticipated to be available for production deliveries in 2024-2026 meeting the USN requirement to have a non-developmental UJTS solution before 2028. Stavatti has secured Letters of Intent (LOIs) for the delivery of over 60 SM-31 Stilettos by US Allied Air Forces and was awarded the Design Patent for the SM-31 by the USPTO on 23 July 2020.