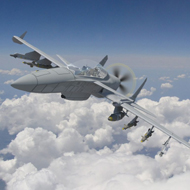 The Armed Overwatch Requirement specified a need for up to 75 Fixed or Rotary Wing Armed Overwatch Aircraft to fulfill Close Air Support (CAS), Armed Intelligence, Surveillance & Reconnaissance (ISR), Strike Coordination & Reconnaissance (SCAR), and Forward Air Control (FAC) roles. Stavatti response outlined how Stavatti has the capability necessary to meet the Armed Overwatch requirement within USSOCOM’s time-frame without causing an unacceptable delay in meeting and exceeding the needs of the warfighter.

The proposed offer of SM-27T Machete aircraft to USSOCOM includes 75 new aircraft. Aircraft delivery can begin in 2023 will full delivery of all 75 aircraft by 2027. The aircraft was offered at an average unit flyaway cost of between $15 Million and $20 Million each, depending upon USSOCOM selected sensors, avionics and electronic warfare systems. The 75 aircraft as proposed may accompanied by a support package including spares, ordnance, ground support, training and maintenance. In full compliance with the Buy American Act, the SM-27T will be produced in the USA with all systems and components produced in the USA with exception of the PW150 derivative turboprop powerplant and MX-10D/MX-15D Electro-Optical Sensor both of which will be produced in Canada in accord with USA/Canada defense trade agreements.

A two seat tandem, single engine turboprop CAS and Attack Aircraft, the SM-27T is intended to address anticipated future CAS and attack aircraft needs of both the USAF and NATO/Allied Air Forces. The SM-27 is designed to serve as a successor to attack aircraft including the A-10 Warthog, Su-25 Frogfoot, A-1H Skyraider, Super Tucano ALX, AT-6 Wolverine, OV-10 Bronco, A-37 Dragonfly, IA-58 Pucara and other attack aircraft. The SM-27 is a three surface aircraft featuring a moderate aspect ratio wing, canard foreplanes, twin vertical stabilizers and an all moving horizontal tail. With a maximum level speed of 400 Ktas, the SM-27 is armed with a 30mm cannon and will carry up to 8,000 lbs of ordnance over 2,000 nm.

Now under development by Stavatti as a privately funded, commercial program, Stavatti is undertaking a $400 Million investor funded development program including a $50 Million prototype and flight test centric Demonstration and Validation (Dem/Val) program and a $350 Million Full Scale Development (FSD) Program. The development effort will result in FAA type certification, DoD Military Qualification and Low Rate Initial Production (LRIP). The SM-27 is now being developed exclusively in the USA and Stavatti has selected a production site in the USA to serve as home to the Machete family production line. Stavatti projects producing between 50 and 100 SM-27s annually depending upon global customer needs and aircraft demand.