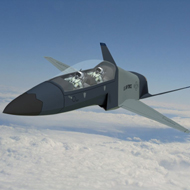 Stavatti Aerospace submitted the new and re-imagined SM-31 T-X as a candidate solution for the USAF Advanced Pilot Training (APT) Family of Systems (FoS) Program (T-X). The second of two proposed aircraft to satisfy the T-X requirement, the Stavatti proposal was submitted to PCO David Speed at AFLCMC/AQH yesterday prior to the 1 PM Eastern deadline. Offered at a per unit flyaway cost of $10 million, the SM-31 T-X is the most affordable entry in the T-X competition. The total cost for the SM-31 T-X solution for 351 aircraft, 46 ground-based training systems, contractor logistical support, and aircraft manufacturing development is under $4.7 Billion.

The SM-31 T-X is an all-new supersonic trainer design. The single engine aircraft is powered by the Honeywell F125 afterburning turbofan and offers a maximum level speed of Mach 1.5 and a stall speed in the landing configuration of 95 KTAS, giving the SM-31 T-X the greatest endurance per pound of fuel compared to any other aircraft yet offered as a T-X solution. With a maximum gross takeoff weight of 12,500 lbs, 176 sq. ft. of wing area and area ruling, the SM-31 T-X is an homage to the original T-38/F-5.

With a high degree of planform alignment and 2-D thrust vectoring, the SM-31 is also the only T-X candidate with low observability in mind. While not necessary for the APT mission, the SM-31 will also be produced as a Very Light Fighter (VLF). Armed with two internally carried AIM-9X Sidewinders, an internal gun (or directed energy weapon), and fitted with both a compact AESA radar and a comprehensive electronic warfare suite, the SM-31 VLF will introduce a new era of highly affordable fifth generation fighters. Built for 9-gs at MTOW and offering standard in-flight refueling capability the SM-31 meets or exceeds all APT FoS RFP requirements.

Designed entirely in the U.S., Stavatti is moving forward with SM-31 T-X development as a private venture funded through risk investor and strategic partner support. First flight of the SM-31 T-X conformal prototype may be as early as 2018. If selected by the USAF for the APT requirement, the first SM-31 T-X will be delivered as an EMD aircraft in 2019. With five planned EMD aircraft, Low Rate Initial Production will begin in 2024, followed by Full Rate Production in 2026. Stavatti will produce 48 aircraft per year for the USAF followed by additional VLF aircraft annually to meet potential allied export fighter needs.

The SM-31 T-X will be built at a Stavatti center in the United States and will directly employ approximately 800 persons for at least two decades. Locations under consideration for SM-31 T-X production include Arizona, California, Florida, Ohio, Texas, Virginia, and Washington.